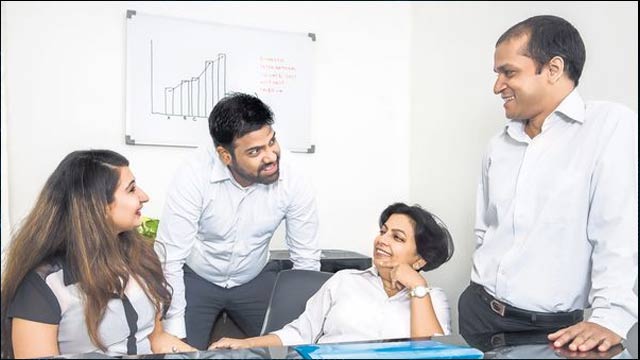 Given the present political climate, tensions on the streets have spilled over into the workplace. Here’s what you need to remember when discussing conflict in the office

Acouple of weeks ago, a casual lunch for the sales team at Darshan C.G.’s office in Bengaluru suddenly turned into a fierce argument. “The debate started generally, but it got personal for the two sides, one supporting and other opposing CAA (the Citizenship Amendment Act),” says Darshan. Soon, the debate turned ugly with name-calling and personal jabs.

Darshan, 34, head of the sales team at the IT company, saw the situation spiraling out of control. “I stepped in to ask how many had actually read the original documents,” says Darshan. It turned out, no one had. On digging further, he realized the sources of information for both sides were television, WhatsApp forwards and other social media platforms.

As protests rage across the world over CAA and National Register of Citizens (NRC), alleging the measures are an attack on a secular constitution and against minority Muslims, not only homes, schools and colleges , but also office spaces are becoming divided. Debates are spreading across cafeterias, in corridors, at the reception and even during cigarette breaks.

Though discussing such issues can be a challenge, they should be talked about openly, suggests Neera Jain, professor (business communication), Management Development Institute, Gurugram. “Such beliefs are rooted in our psyche and cannot be dismantled over a lunch,” she says. It’s ironical, adds Jain, as lunch hour was traditionally a time when people used to diffuse work-related tensions. “With politics becoming the subject of conversations, tensions are building up.”

Having said that, conversations around politics, though emotional, are unavoidable right now, she adds.

Most people spend a large part of their day at work and tend to discuss what’s on their mind. “Freedom of speech is a fundamental right, so you cannot set up an itinerary for what conversations can and cannot be had at the lunch table,” says Jain.

Instead, she says political thoughts need to be channelled in a way that does not impact relationships. “Respect multiple opinions of co-workers and be respectful.”

Understand that conversations around politics can cause grief not only to those arguing, but also to those caught in the crossfire, says Abhishek Kishore, the human resource (HR) head at Stylework, a co-working space aggregator.

Kishore faced this recently when a Stylework employee reached the office late because of traffic congestion due to a protest. The employee was angry at the protestors for causing the delay, while his co-worker argued that protests were important. Before Kishore knew it, both colleagues were shouting, disturbing others in the office.

“Initially, I tried to concentrate on my work as the conversation did not involve me, but when it got heated, I had to intervene. I told them to drop the subject as they were affecting others,” says Kishore. The two workers did not listen and kept arguing, till the manager had to intervene. “Political conversations can affect workplace relationships, and can be quite divisive if not handled maturely,” says Kishore.

To ensure a discussion does not become a shouting match, you need to step back. Stepping back from an argument actually helps save a working relationship with colleagues, says Chennai-based Krishna R.G., a product marketer at a SaaS firm.

Knowing that Krishna has certain political beliefs, one of his colleagues recently asked him about an issue. “He wanted to argue and was convinced about his point of view,” Krishna says. Arguing back would have made it harder for Krishna to work with his colleague.

“Thinking you are right and another person is wrong is not really good for the working environment, as a team needs to respect difference of opinion,” he says. Though Krishna disagreed with his colleague’s point of view, he decided not to engage.

In an ideal situation, lunch and informal interactions at work would be focused on building strong relationships that drive productivity and team cohesiveness, says Sonica Aron, managing partner at Marching Sheep, an HR consultancy. But many people are assertive and vocal, so incidents like Krishna’s will happen. “Each of us have a right to our opinions, but even when we disagree, we need to respect varying opinions and accept our co-workers,” says Aron.

Discussions are vital for any team, agrees Darshan. The manager, however, needs to direct the conversations in a positive direction to avoid rifts.

WHEN CONFLICT IS GOOD

There is an upside to being in opposite camps—it creates a healthy team.

Aron recently facilitated a workshop where a participant had a strong allegiance to a political ideology. She allowed him to speak about it. After everyone had expressed their opinions, they all agreed to disagree. “Handling conflict of any kind, having difficult conversations, agreeing to disagree and still working together are competencies that come in handy in managerial and leadership roles,” says Aron.

Rather than banning controversial conversations in offices, workers should be made aware of different ideologies by running inclusion workshops, suggests Aron. “It is important for every office to provide a safe space for people to express their opinions and allow healthy acceptance of opposing views.”